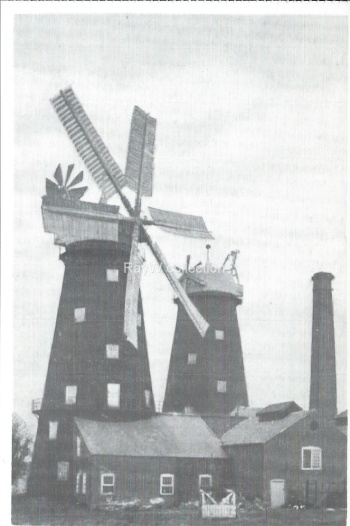 James Oakes also built two tower windmills near Alfreton, named James and Sarah (after his wife Sarah Haddon). These were built in a yard (grid reference SK424531) on Greenhill Lane in 1870 or 1877, possibly on the site of a post mill advertised for sale in 1829. James was a brick tower 67 feet (20 m) high of 7 storeys, 36 feet 6 inches (11.13 m) diameter at the base, driven by six double-bladed patent sails and with eight-bladed fantails. Sarah appears to have had only 6 storeys. There were 2 open galleries on both mills, above the second floor and below the cap. The windshafts were of iron, 13 inches (33 cm) diameter. Other internal equipment has not been recorded.

Because the mills were close together one of the towers would ‘rob the wind’ (or obstruct the airflow to the sails) of the other. Consequentially before 1890 the Sarah mill had its sails removed and the milling machinery powered by a vertical-boilered stationary steam engine. It is possible that Sarah never had the sails fitted. The mills were used for grinding grain from the Oakes’ estates, both for flour and for animal feed. In 1918 the sails of the James mill were removed and the steam plant replaced by a 24 horsepower (18 kW) oil engine which powered both mills. The mills stopped work c. 1927.

The floors of James were removed some time after 1927 and the mill used by the Granwood company, manufacturers of composition block flooring, to store sawdust.

Ownership of the mills passed to the National Coal Board in 1947. In 1948 the N.C.B. sold the mills and some surrounding land to Deosan Ltd., who had a nearby chemical factory. Both mills were used by Deosan as storage space. In the winter of 1949 Deosan contracted an Alfreton scrap dealer to remove most of the metal from the mills, including the windshafts, in preparation for the installation of working plant. From Sarah 30 long tons (30 t) of scrap were removed; from James (after erecting scaffolding inside the tower) 7 long tons (7 t). The floors of James were re-instated and it was used for storage; Sarah had chemical plant installed.