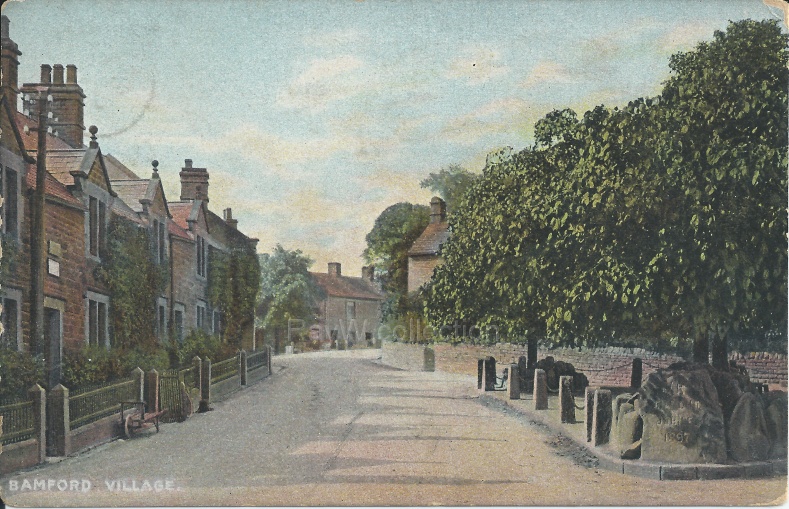 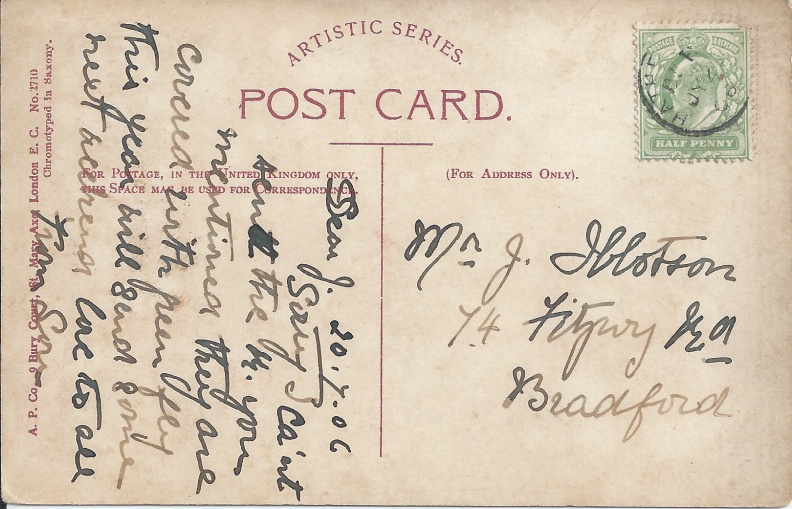 Bamford is recorded in the Domesday Book as Banford, and likely came from Anglo-Saxon Bēamford = “tree-trunk ford”.

The parish church of St John the Baptist was built c. 1860. There are also Methodist and Catholic churches in the village.

The village graveyard of The parish church of St John the Baptist (built c.1860) contains some re-interred graves from the nearly villages of Derwent and Ashopton which were drowned following the creation of Ladybower Reservoir.

Bamford remained a small agricultural village until the corn mill, which was burned down and then sold in about 1780, was converted to a water powered cotton spinning mill. The Moore family, who owned similar properties in Manchester, developed the mill and thus the industrial revolution came to the village. The mill is now converted to residential use.

Bamford Mill SK205833
Cotton mills which evolved out of former village spinning workshops included those at Bamford and Edale, which, like that at Calver, were both developed on the sites of earlier corn mills. The one at Bamford (SK 205833) was operated from 1782 as a cotton mill by a local farmer and miller, Christopher Kirk. The original mill probably had four storeys but was destroyed by fire on 24 October 1791. It was rebuilt by H. C. Moore, the weir being constructed with rocks from Bamford Edge. It was probably at the time of subsequent rebuilding that power spinning was introduced. The mill was originally powered by the River Derwent but in the nineteenth century a beam engine was installed; it was replaced in 1907 by a horizontal steam engine made by John Musgrave and Sons Ltd of Bolton which continued in use until 1965. Water power was used for generating electricity by two reaction turbines generating 45hp and 22hp respectively-one of them transferred here from Edale Mill-and until 1951 the mill manufactured its own gas supply. In 1857 S. M. Moore and Son had a 60 hp steam engine and employed 230 hands. The mill was sold in 1885 to Hamilton Cash of Mansfield and in 1902 to Fine Spinners and Doublers Ltd. In July 1965 it was closed down by Courtaulds when employing 120 people. From 1902 the mill belonged to the firm of Fine Spinners and Doublers Ltd and was used for the doubling and reeling of cotton which was brought here from Manchester ready carded and spun; in 1963 the business was taken over by Courtaulds and closed down in October 1965. In 1966 the premises were bought by the Carbolite Company Ltd, and after conversion were used for the manufacture of electric furnaces and laboratory and research equipment.