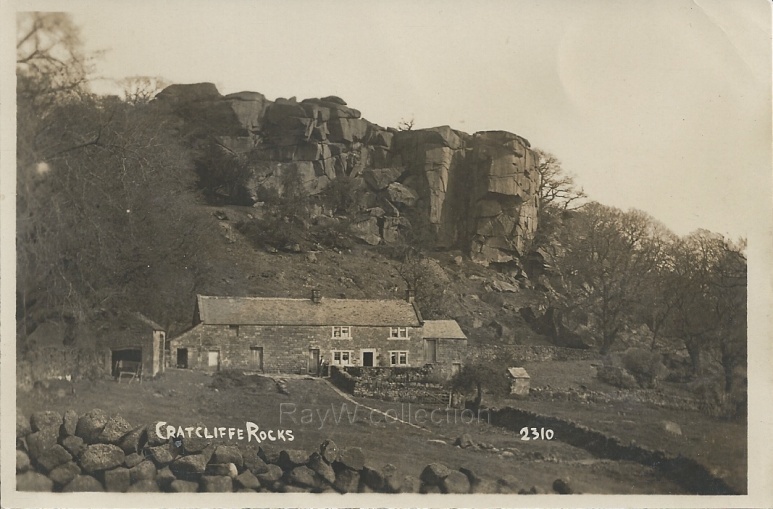 At the base of Cratcliffe Rocks on the western side is Hermit’s Cave. The Hermit’s Cave with a four feet high crudely carved crucifixion on the wall and a niche for a lamp or candle by its side probably dates to the 14th century. The features of the crucifixion are worn and the lower part of the legs damaged, but otherwise the sculpture is in remarkable condition for something so old. The carving was damaged by vandals in the past and in ‘The Caves of Derbyshire’ fifth edition of 1984 the cave was said to have been used by climbers as a shelter. It is now secured with full length iron railings. An exterior rainwater groove and slots suggest that a lean-to shelter extended the hermit’s home and there is a fairly large yew tree outside the cave which could well be older than the carving.
The crucifixion is carved such that the hermit was able to see it from his sleeping ledge in the west wall.

A manuscript Rule of Hermits of the 14th century states:
‘Let it suffice thee to have on thine altar an image of the Saviour hanging upon the cross, which represents to thee His passion which thou shalt imitate, inviting thee with outspread arms to himself.’

Early travellers were dependant upon hospitality along their journey and in the Middle Ages hermits were expected to provide this by the church. In the fourteenth century such crucifixes were ordered to be provided by, or for, hermits and this one may have been the work of a stonemason. It possibly even predates that ruling.

Who the hermit was is not known but a record survives in the kitchen notes of Haddon Hall to show a possible resident in 1549 when a payment was made, on 23 December, to ‘Ye harmytt’ for supplying ten rabbits. It is also noted that ‘Ye Cratcliffe Hermitte was paid fourpence for guidance of people to Haddon’.

In about the 13th century Pope Innocent IV decreed that all such hermits should be organized under a modified St. Augustine’s rule. They were to be properly appointed by the bishops and frequently had pensions and servants. Generally they were placed in some position where they could perform useful services and good works as in guiding travellers through woods and over rivers. The Cratcliffe hermit would always be in touch with travellers on the Portway which ran close by.

Excavations in the area show they also valued its proximity to the old Portway and that this highway was busy in Roman times. In 1845 Bateman recorded in his Vestiges that he had found Romano-British pottery in the rock shelters around Robin Hood’s Stride, and a coin of the Emperor Tetricus. Many Roman coins have been found since, as well as further pottery sherds of the red, black or grey amphora type, jet buttons, pieces of lead and wires of bronze. Undoubtedly
There is also evidence of hillforts and other earlier activity around Cratcliffe that would predate the Roman era. At SK226626 there is Nine Stones Close stone circle and Castle Ring hillfort at SK221628.