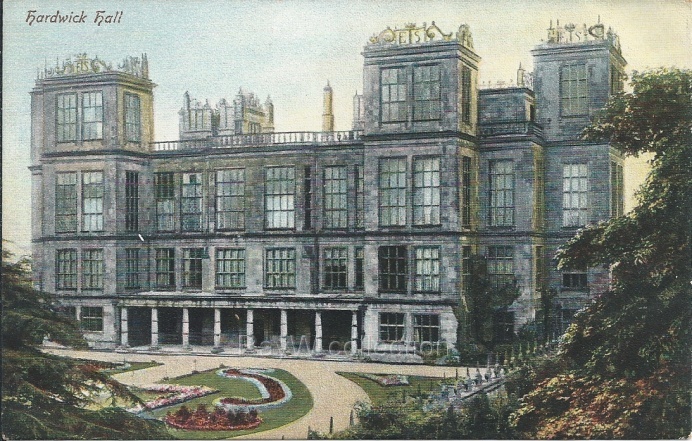 “Hardwick Hall is witness to a woman who had the vision, the wealth and the sheer audacity to construct a house that still takes people’s breath away centuries later. The golden stonework and the sparkling expanses of costly, but oh so fragile glass, look down on the ruins of an earlier attempt at building a house fit for a dynasty, but one quickly surpassed by a totally new building.

‘Hardwick Hall, more glass than wall’, is a well-known local saying that actually characterises one of the key features of Hardwick, namely the exuberant use of an expensive and rare material for houses in 1590s England, namely glass.  Begun in 1590 and completed only seven years later Hardwick is a house that shouted innovation from the same rooftops that proclaimed the builder of the house, Elizabeth Shrewsbury, the Countess of Shrewsbury, with her initials ‘ES’ proudly sitting  atop the turrets of the house.

Innovations abound at Hardwick, notably that it is one of the first buildings in the country to be ‘designed’ by an ‘architect’; Robert Smythson drew up a plan and a picture of what the building would look like when completed. Externally Hardwick is symmetrical, a new idea in building design and appearance that provided a complete contrast to the Old hall that only pre-dates the New Hall by five years. The windows increase in size from the ground floor with its services, the middle floor with an extra light of window denoting the family quarters and the large four light windows of the top floor indicating the show rooms on the top floor.

Internally the Countess and her team ‘modified’ Smythson’s plan to ensure that the main staircase rose majestically from the entrance hall in a series of twists and turns to the High Great Chamber on the top floor.  Eight huge windows light this majestic room where important guests had their meals and participated in the entertainment, whether dancing or watching travelling players, listening to music or just playing cards.  The adjacent Long Gallery runs the whole length of the east side of the house, a striking room to display tapestries and pictures, highlighting the wealth and status of the Countess of Shrewsbury.”