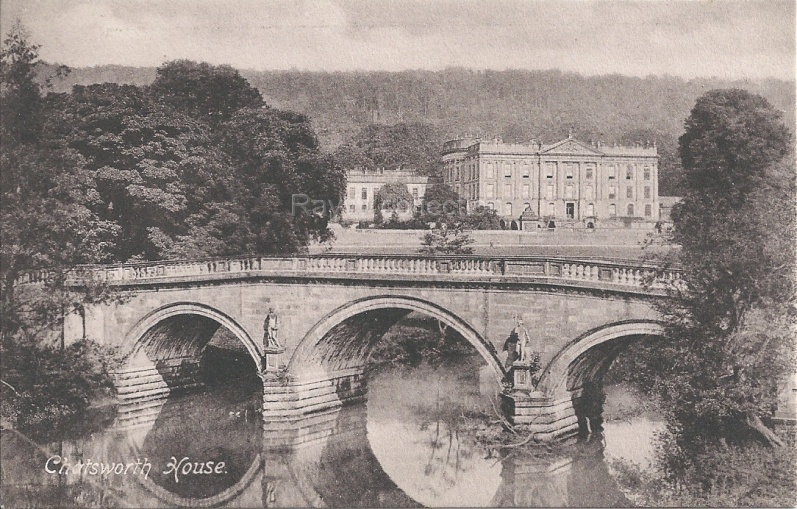 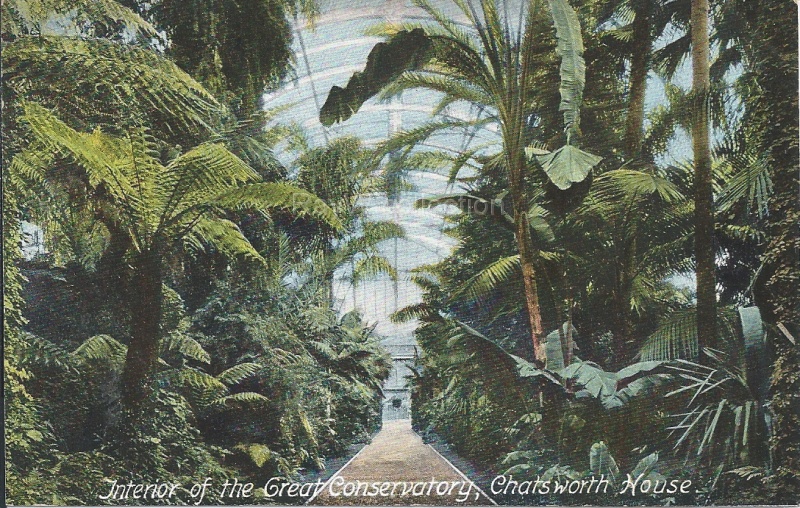 Much information is available on Wikipedia.

Chatsworth Park Ridge and Furrow cultivation
In Chatsworth Park, and many other places in Derbyshire, it is possible to see where medieval ridge and furrow cultivation of the land took place. Over many years this appearance has eroded but especially on a summer evening or at sunset, with the sun low in the sky it is easier to make out the humps and hollows created by this ancient ploughing method. Surviving ridge and furrow may have a height difference of 18 to 24 in (0.5 to 0.6 m) in places, and gives a strongly rippled effect to the landscape. When in active use, the height difference was even more, over 6 feet (1.8 m) in places. Once this appearance has been spotted it is easier to notice line upon line of the rippling remnants of this ancient ploughing method, some straight and some with a slight curve built up slowly over hundreds of years.

Back in Anglo Saxon times, before enclosure, families owned strips of land with neighbours farming adjacent strips. Ploughs were mainly pulled by oxen as horses were mainly used by the military.

Over years the ploughing motion built up earth in the centre of the strip and left a hollow between each ridge which often marked the boundary between plots. This type of farming continued until enclosure when modern farming methods destroyed the ridges and furrows. The ones such as in Chatsworth Park only survived where modern ploughing did not take place as fields were kept for pasture as grasslands or country estate parkland.

As each strip was cultivated by one small family, within large open fields held in common, and the location of the ploughing was the same each year, the movement of soil year after year gradually built the centre of the strip up into a ridge, leaving a dip, or “furrow” between each ridge. This type of furrow is not the same as a furrow left by each pass of the plough. The action of building up of a ridge was called filling or gathering, and was sometimes done before ploughing began. The raised ridges offered better drainage in a wet climate as moisture drained into the furrows, and since the ridges were laid down a slope, in a sloping field water would collect in a ditch at the bottom. Because the base of the ridge would be wetter then crops such as pulses would be planted here in preference to wheat which would not be so tolerant.

Traditional ploughs turn the soil over in one direction, with the ploughshare and moldboard to the right thus the plough cannot return along the same furrow. Consequently ploughing is done in a clockwise direction around a long rectangular strip of land. After ploughing one of the long sides of the strip, the plough is removed from the ground, moved across the unploughed headland (the short end of the strip), then put back in the ground to work back down the other long side of the strip. The width of the ploughed strip is fairly narrow, to avoid having to drag the plough too far across the headland. This process has the effect of moving the soil in each half of the strip one furrow’s-width towards the centre line.

Farmers could use up to eight oxen positioned two abreast and secured together with yokes before being attached to the plough. They didn’t use bridles or reins to control the oxen so the ploughman worked with a boy who carried a long stick which he used to keep the oxen moving by reaching across and giving them a tap. At the end of the field the plough boy used his stick to drive the oxen round in a half circle, then guide them back down the field, and so continue the ploughing. The plough boy’s stick had a name, it was called a rod, pole or perch depending on locality and at 5.5 yards long was just the right length to reach the far oxen, and not too heavy to carry. If the rod was laid 4 times across the field, that made 22 yards, if it was laid 40 times down the field, that made 220 yards, and the area was called 1 acre, the amount a ploughman and his boy could plough in a day in the available daylight hours. The breadth of 22 yards was known as a chain, the length of a cricket pitch and the length of 220 yards was known as a farrow length or as we call it today, a furlong.

Jubilee Rock
In Chatsworth Park at its Northern edge there is a carved an inscription on the face of what is now known as Jubilee Rock to commemorate Queen Victoria’s Golden Jubilee . The rock was previously known as the Elephant Stone.

The Hunting Tower
The Tower stands on the escarpment 400 feet above Chatsworth House, on the edge of Stand Wood. There are panoramic views over Capability Brown’s magnificent Park. This unique and fascinating building was completed c.1582 for Bess of Hardwick, ancestress of the Dukes of Devonshire, to designs by the famous Elizabethan architect Robert Smythson.

The 16th century Hunting Tower may have been a banqueting house or summerhouse and, as its name implies, it was also used by the ladies to watch the hounds working when hunting in the park below. In modern times it was lived in by members of the Estate staff and most recently by the Duke’s nephew.

The Cottage was built between 1839 and 1842 as part of the 6th Duke of Devonshire’s many improvements to the Chatsworth Estate. It was designed by Joseph Paxton or his associate John Robertson, as an ‘eye-catcher’ in the landscape, to be admired on carriage rides or walks around the estate.

The drive up to Swiss Cottage takes you through historic Stand Wood, with its magnificent trees, where you may encounter a ‘ruined’ aqueduct, and other waterfalls and stone steps, all designed by Paxton.

At the top of the hill, there are sensational views and a series of man-made lakes. The Emperor lake feeds the famous fountain of the same name in the Chatsworth garden, but the Swiss lake, to which the cottage gave its name was dug out to supply water to the 1st Duke’s Cascade in the 1690s.

Built as a gamekeeper’s cottage, the building has now been completely restored by the Duchess of Devonshire, right down to the shelves of books on Swiss themes.