Beresford Dale Pike Pool is part of the Dove valley. 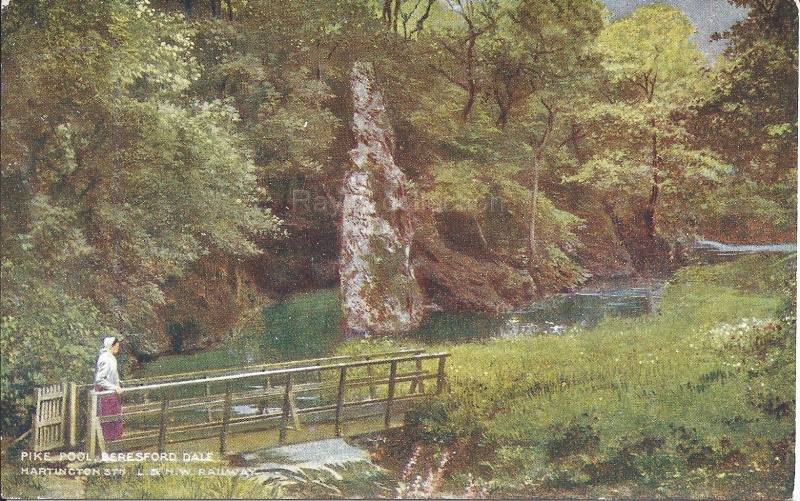 Beresford Dale is associated with Izzak Walton and his friend, though 40 years his junior, Charles Cotton, and the 17th century classic ‘The Compleat Angler or The Contemplative Man’s Recreation’.

Charles Cotton’s home and birthplace was Beresford Hall which stood above the dale. The ruins can still be seen. In 1674 he built a Fishing Temple which still stands in a corner of private grounds by the river and is a secular shrine to all anglers. It is a stone built, single roomed building, with his own monogram entwined with Walton’s over the door.

Half way along the Dale is Pike Pool, so called, as Cotton himself tells us because of its grey monolith or pike that rises out of the water.

As the wooded section comes to an end, one can cross the footbridge and continue to walk along side the rive Dove, though the valley has now opened out and low lying meadows take the place of the gorge. Not for long, because you soon arrive at another footbridge and the start of Wolfscote Dale.

For many years a regular sight in Beresford Dale was Dora Oliver, who acted as the water baliff. She was well informed and very popular, though the scourge of people who thought that the river was a playground. Her father had been the baliff here before her. She died in 1987.